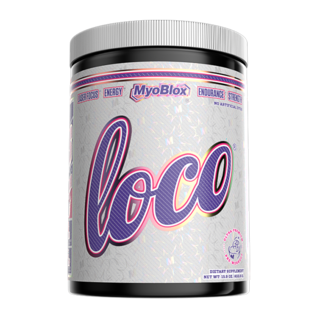 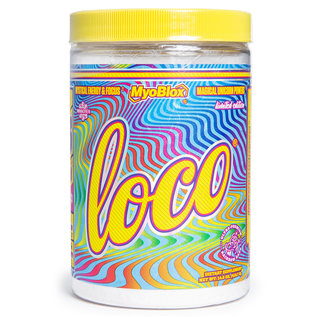 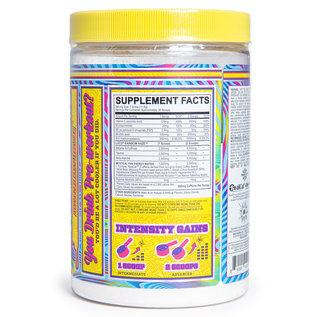 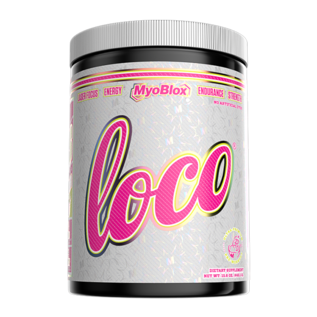 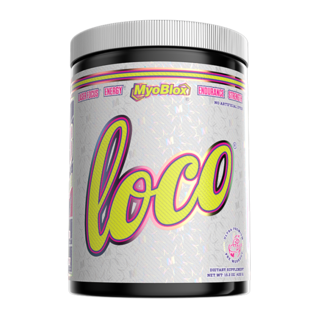 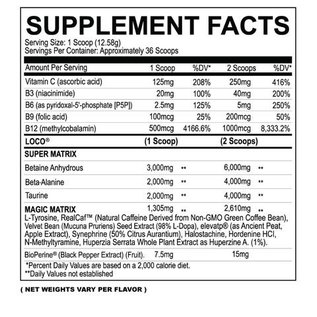 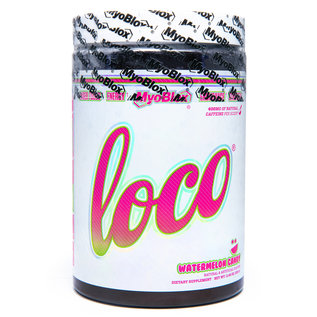 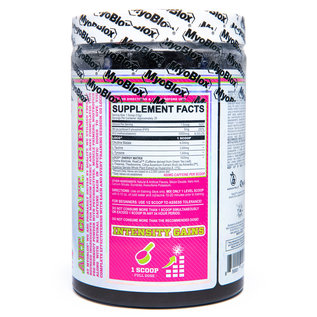 LOCO® is our all-in-one pre workout supplement that packs a strong punch! Experience elevated energy, focus, intensity and skin splitting muscle pumps! We made sure we had sourced quality ingredients each in their respected doses of psychoactives, nootropics and muscle primers that will launch your workouts to the next fkn level every time you hit the gym. Don't waste money on crap that doesn't do crap, GO FKN LOCO®.

PS: THE FLAVORS ARE BOMB AS HELL, ENJOY!

BETAINE ANHYDROUS (TRIMETHYLGLYCINE): Clinically studied for having multiple unique effects on performance, betaine may support feelings of wellbeing due to its effect on methylation, may support body composition changes due to its effect on energy pathways, and may also decrease homocysteine levels, a marker of oxidative stress. Betaine shoots to the top and proves itself efficacious by any athlete looking to increase their lean muscle mass and reduce body fat. †

BETA-ALANINE: Superior ingredient for pre-workout supplementation, beta-alanine is a precursor to carnosine. Being responsible for maintaining the cell's pH balance, which in turn neutralizes hydrogen atom buildup, Beta Alanine supports strength endurance by liberating the muscles ability to contract more powerfully for longer frequencies of time with less rest between sets. †

TAURINE: As a non-essential amino acid, taurine can also be considered a conditionally essential amino acid as times of extreme physical exertion. It is also one of the most abundant amino acids in the body, which can be found in the skeletal muscles, the brain, central nervous system, and white blood cells. It can help improve endurance and agility by the regulation of muscle contractions, water balance, nutrient delivery and energy levels of neurotransmitters in the brain. Taurine can also support body composition levels acting as a cell volumizer by drawing water into the muscle cells and in turn supports additional nutrients to be absorbed into the muscle. †

L-TYROSINE: This amino acid is a forerunner of two of the most important neurotransmitters, dopamine and norepinephrine. It enhances working memory and executive function through chemical signalers in the prefrontal cortex. A quintessential limitless nootropic, it can increase focus, internalized motivation, boost inspiration of creative flow, and enhance a state of wellbeing through cortisol reduction.†

REALCAF™ (CAFFEINE DERIVED FROM GREEN COFFEE BEANS): Superior to Caffeine Anhydrous, our Organic Caffeine is natural and derived from Organic Green Coffee Bean. Caffeine is a stimulant xanthine alkaloid compound and has been extensively documented to improve mental performance via stimulating the Central Nervous System (CNS). This widely used compound works by targeting chemical receptor sites located in the brain stimulating the central nervous system. By this stimulation, the release of key neurotransmitters such as dopamine are increased, which is a powerful brain chemical that activates pleasure centers within the brain. The dopaminergic activity of caffeine is a key reason why you attain concentration, and a feeling of wellbeing.

VELVET BEAN EXTRACT (98% L-DOPA) MUCUNA PRURIENS: L-Dopa is an amino acid and a hormone that is created via biosynthesis from the amino acid L-Tyrosine. It has been long studied and has been shown to increase levels of adrenergic hormones Norepinephrine and Epinephrine, which are responsible for numerous effects such as motor control, immune function, energy levels and even healthier sleep cycles when in a sleep state. As a nootropic, L-Dopa is used to combat anxiety and depression while enhancing concentration, focus and mood.†

SYNEPHRINE (50%) CITRUS AURANTIUM: The extract contains alkaloids, which are related to the ephedrine alkaloids and have similar effects on metabolism and breakdown of fat. This special multi-compound powerhouse increases the metabolic rate, and also increases the rate of breakdown of stored fat (lipolysis) in the body. The alkaloids present in synephrine include synephrine, hordenine, octopamine, tyramine and N-methyltyramine and be assured that dozens of studies support the safety and effectiveness of synephrine.†

HORDENINE HCI: Supporting the release of powerful neurotransmitters that support the elevation of mental energy, mood and focus, hordenine is truly a synergist when it came to formulating the Skywalk™ formula! Hordenine is also able to cross the blood brain barrier where it can act as a monoamine oxidase inhibitor (MAO) via attaching to certain receptor sites in the brain. By this function it is able to help prevent loss of focus, crashing energy levels and also stress.†

N-METHYLTYRAMINE: By stimulating the release of Norardrenaline, a neurotransmitter involved in the ‘flight or fight’ response, which in turn will enhance focus and have a mild stimulating effect. N-Methyltyramine (NMT) can also increase the activity of dopaminergic, adrenergic and serotonergic neurotransmitters, which can play a role in mental energy, mood and contribute antidepressant-like effects.†

HUPERZIA SERRATA (AS HUPERZINE A): Huperzine A is the active compound found in a species of fir clubmoss (Huperzia Serrata). This compound has a powerful inhibitory effect on acetylcholinesterase (AchE), an enzyme responsible for degrading the neurotransmitter acetylcholine (Ach) thus boosting acetylcholine levels and preventing oxidative stress in cholinergic neurons. The action of this herbal extract can contribute to learning, memory, and reduce impairments associated with neurological disease.†

BIOPERINE® (BLACK PEPPER EXTRACT): Derived from peppercorns from Piper Nigrum Plants, Bioperine® is a patented extract that is used as a bioavailability enhancer of numerous nutrients via stimulation of the digestive tract.†

B3 (NIACIN): Niacin (niacinimide), also known as B3 is involved in numerous reactions inside of cells that convert nutrients into cellular energy. Niacin’s primary cognitive action is as a cerebral vasodilator, which means it increases blood circulation to the brain. By delivering more oxygen, glucose and other nutrients to the brain, niacin can result in higher levels of alertness and greater concentration and mental stamina. Applying niacin pre-workout can cause the blood vessels to dilate, which could in turn support greater muscle pumps. †

B6 (AS PYRIDOXAL-5'-PHOSPHATE [P5P]): Vitamin B6 (pyridoxine) is absolutely critical for brain function. Unfortunately it is poorly assimilated, and for this reason we utilized the most novel form of B6 called ‘Pyridoxal Phosphate’ (P5P) because it is the most active form in the body. This super-co-factor is utilized in energy metabolism processes in your cells as well as in the synthesis of several different neurotransmitters such as Acetylcholine, dopamine, serotonin, norepinephrine, and Melatonin. These chemicals carry signals from one neuron to another, igniting our thoughts, memory encoding, information consolidation, focus, feelings, and both conscious and unconscious movements. †

B9 (FOLIC ACID): an essential B vitamin (B9 / also known as folate) that plays an important role in DNA and RNA synthesis, production of red blood cells, cardiovascular health, mood, mental functioning and maintenance of the nervous system. Adequate levels of folic acid help to maintain low levels of homocysteine, which in turn supports nerve cells in the brain that produce dopamine. It is found that as exercise intensity increases, consuming more folic acid can contribute to lower homocysteine plasma levels. †

B12 (AS METHYLCOBALAMIN): Vitamin B12 (Cobalamin), is a water soluble vitamin which has a key role in the normal functioning of the brain, nervous system, formulation of blood, and the metabolism of every cell in the human body. However, not all cobalamins are equal in effectiveness and because of this fact, we had to utilized the most active form of B12 known as methylcobalamin. The nootropic benefits from this novel co-factor range from neuron development and maintenance as well as cognitive processes related to memory, learning, attention span and overall alertness. This compound can also rebuild damaged nerves and contributes to the maintenance of function that is normally decayed during the aging process. †

VITAMIN C (AS ASCORBIC ACID): Both a water-soluble vitamin and antioxidant depending on the body’s requirements, vitamin c is a multifaceted power nutrient that plays key roles in many of the bodily processes. From a pre-workout standpoint Vitamin C can reduce oxidative stress, mitigate the damage from free radicals, support the synthesis of neurotransmitters and reduce unwanted cortisol levels.† 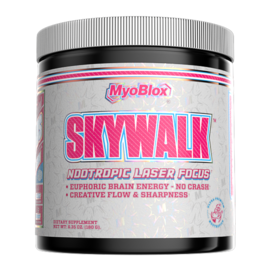 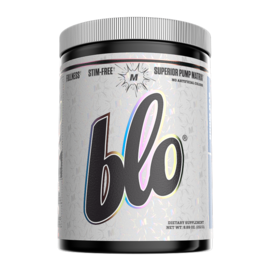