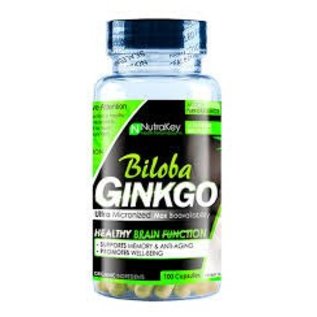 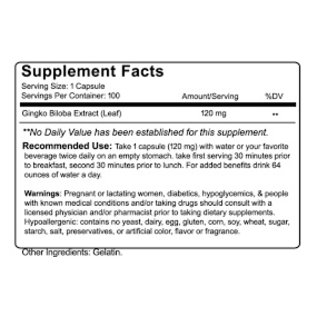 Better Brain and Body: Enhance your cognitive abilities and increase the capacity of your cardiovascular system.*4,1

Used for thousands of years throughout Asia to improve memory and focus, Ginkgo Biloba has also been found to both increase blood flow and circulation throughout muscle tissue – potentially increasing athletic ability and strength while reducing recovery time and soreness.*1,2

This combination of both mental and athletic enhancements, along with millennia of safe human consumption, make Ginkgo a must have for any serious body builder or student, and a safe addition to most other stimulants and nootropics (cognitive enhancers).

Both the cognitive and physical benefits of Ginkgo are thought to be caused by the vasodilation (expansion) of small blood vessels throughout brain and muscle tissue.4 As these blood vessels expand, increased blood flow (microcirculation) provides better nutrient and oxygen delivery, which is especially beneficial during times of intense exercise or mental exertion.3

Increased oxygen allows both brain and muscle tissue to operate at peak efficiencies over extended durations before becoming fatigued.3 In laboratory studies, this has resulted in improved memory and mental clarity; faster muscle recovery; and enhanced physical and mental endurance.*3

Improving blood flow also allows the body to remove toxins associated with mental and physical fatigue, further reducing the need for recovery and perhaps even sleep.*3,5

Protect Your Body and Mind

Ginkgo also act as a potent antioxidant and adaptogenic – improving your ability to avoid damage from dangerous compounds in the body and adapt to new challenges or stressors.*4

While cultures have been consuming Ginkgo for thousands of years, modern studies have only recently found significant evidence to support the cognitive enhancements of Ginkgo supplementation. More specifically, Ginkgo has been shown to significantly improve attention, motivation, short-term memory, and brain function in healthy individuals.*1

While the effects are only short-term, Ginkgo is relatively fast acting and can be taken whenever you need a quick cognitive boost (30-60 minutes before is ideal).

Unlike traditional supplements, NutraKey’s Ginkgo Biloba has been specifically developed for maximum bioavailability and absorption by the body. These strict standards of quality and delivery are meant to increase the amount of Ginkgo that actually makes it to your bloodstream and used by your body. When it comes to quality and effectiveness, there’s simply no other choice.~NUTRAKEY